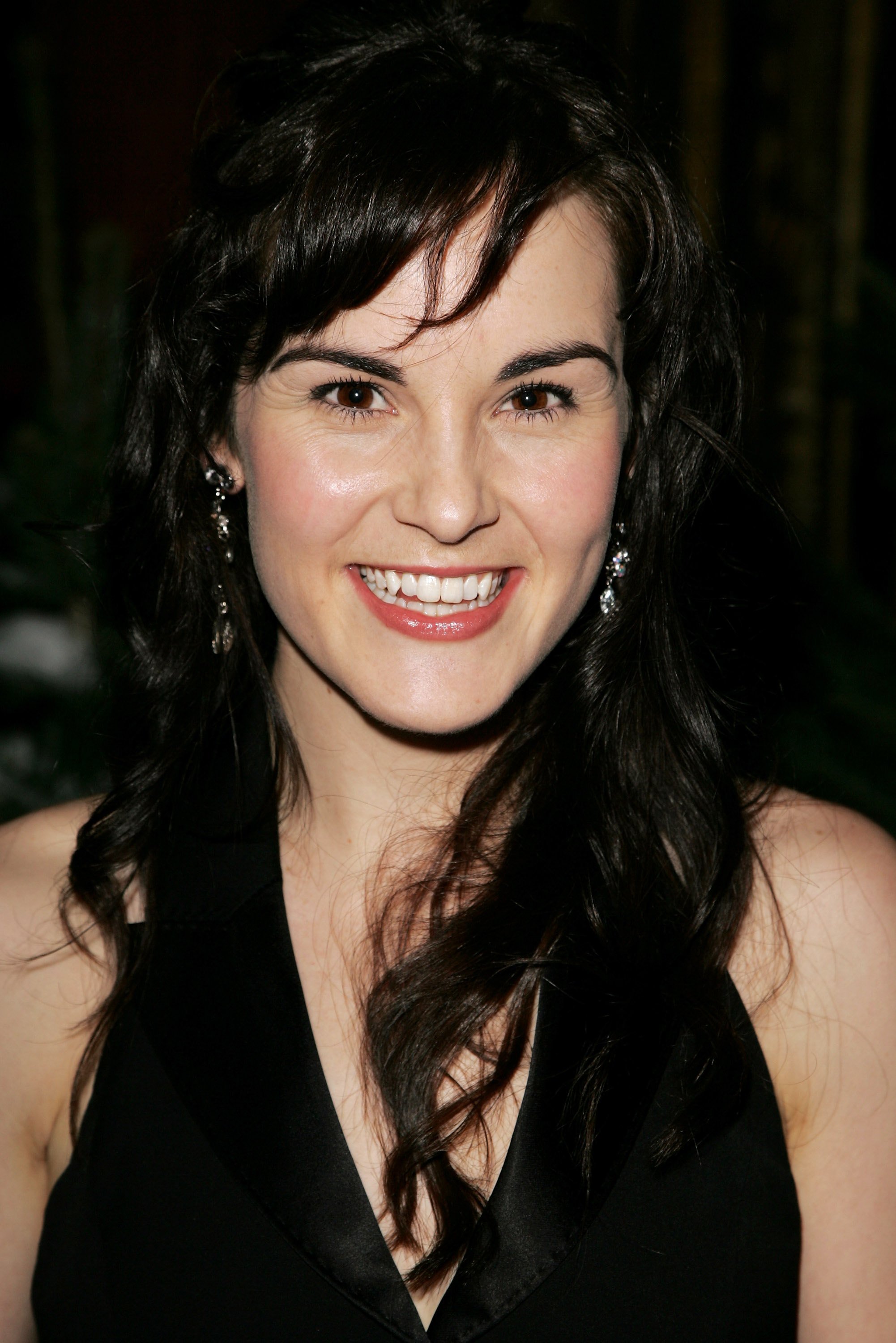 Michelle Suzanne Dockery was born on December 15, 1981 at Rush Green Hospital in Rush Green, Essex. She is most widely known for her leading performance as Lady Mary Crawley in the ITV (UK) television period drama series Downton Abbey (2010–15), for which she was nominated for a Golden Globe Award and three consecutive Primetime Emmy Awards in the category of Outstanding Lead Actress in a Drama Series. She grew up in Romford, in Essex, and she still has traces of an Estuary accent. She says, “I’ll never sound like Lady Mary, although my Essex accent has softened over the years. But it comes back if I’ve had a couple of drinks or if I am around my family”. Dockery has two older sisters, Louise and Joanne. She was educated first at Chadwell Heath Academy, and later at the Finch Stage School. Dockery confirmed in a 2017 interview with Parade that if you asked her parents when she began performing they would answer that it was when she was 2 or 3 years old. “I wanted to entertain from such a young age, doing impersonations and putting on plays with my sisters,” says Dockery. “I always had it in me and loved it.” She remembers being 9 and performing for family members when they came to visit. After her A Levels, she enrolled at the Guildhall School of Music & Drama, where she was awarded the Gold Medal for Drama at her graduation in 2004. Dockery was a member of the National Youth Theatre. She made her professional debut in His Dark Materials at the Royal National Theatre in 2004. In 2006, she was nominated for the Ian Charleson Award for her performance as Dina Dorf in Pillars of the Community at the National Theatre. She appeared in Burnt by the Sun at the National Theatre, for which she received an Olivier Award nomination for Best Supporting Actress. She won second prize at the Ian Charleson Awards for her performance as Eliza Doolittle in Peter Hall’s production of Pygmalion at the Theatre Royal, Bath, which toured the UK and transferred to The Old Vic in 2008, and for the same production was nominated Best Newcomer at the Evening Standard Awards 2008. In 2010, she played Ophelia in Hamlet at the Crucible Theatre alongside John Simm. 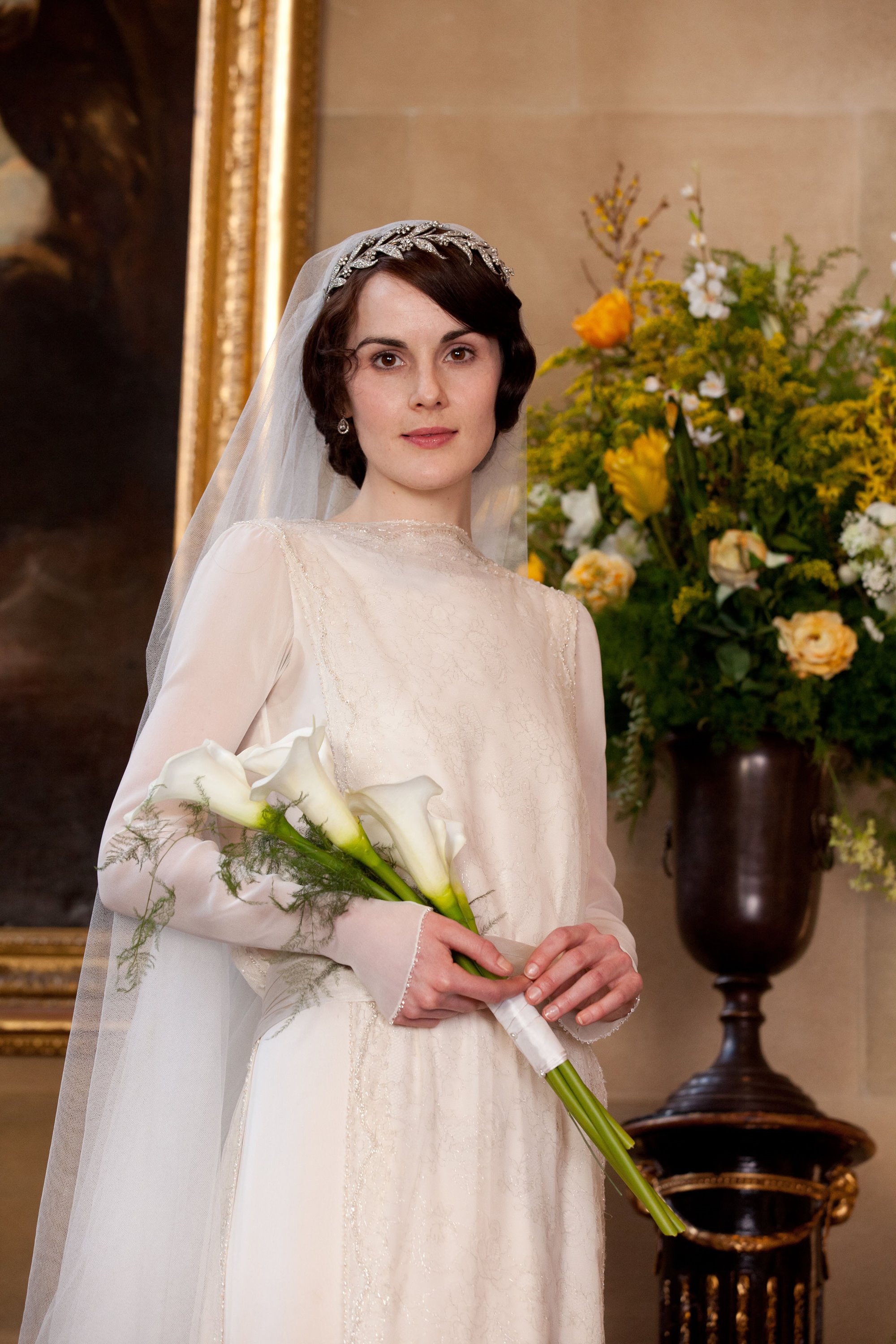 Dockery made her television debut as Betty in Fingersmith in 2005. In 2006, she starred as Susan Sto Helit in a two-part adaptation of Terry Pratchett’s novel Hogfather. In 2008, Dockery played Kathryn in Channel 4’s The Red Riding Trilogy and played the guest lead of tormented rape victim Gemma Morrison in BBC’s Waking the Dead. In 2009, she appeared in the two-part Cranford Christmas special for the BBC, and she also starred as the lead character, as the young governess, in a modernised BBC adaptation of The Turn of the Screw with her future Downton Abbey co-star Dan Stevens, in the role of her psychiatrist. Dockery came to public prominence in 2010 when she played Lady Mary Crawley in Julian Fellowes’ series Downton Abbey. Downton Abbey was filmed from February–August 2010–15. The series was broadcast on ITV September–November, with a special Christmas night episode for Series 2–6 in 2011–15, with a later airing schedule in the U.S. for PBS. For her role as Lady Mary Crawley in the Downton Abbey series, Dockery received three consecutive Emmy Award nominations in the category for Outstanding Lead Actress In Drama Series – 2012, 2013, and 2014. She also earned a Golden Globe nomination in 2013. Dockery’s first big screen role was as False Marissa in Hanna (2011). In 2012, she appeared as Princess Myagkaya in the film adaptation of Anna Karenina and starred with Charlotte Rampling in a two-part dramatisation of William Boyd’s spy thriller Restless on BBC One. In January 2014, she appeared in the action thriller feature film Non-Stop alongside co-stars Liam Neeson, Julianne Moore, and Lupita Nyong’o. In 2014, Dockery was made Fellow of the Guildhall School in recognition of her achievements in television. In 2014, Dockery was listed in The Sunday Times Britain’s 500 Most Influential People, which is a compilation of the most significant individuals in the UK who have demonstrated outstanding qualities of influence, achievement and inspiration. A departure from her portrayal as Lady Mary in Downton Abbey, Dockery advanced her Hollywood career with a 2015 performance in sci-fi thriller feature film Self/less with Ryan Reynolds. 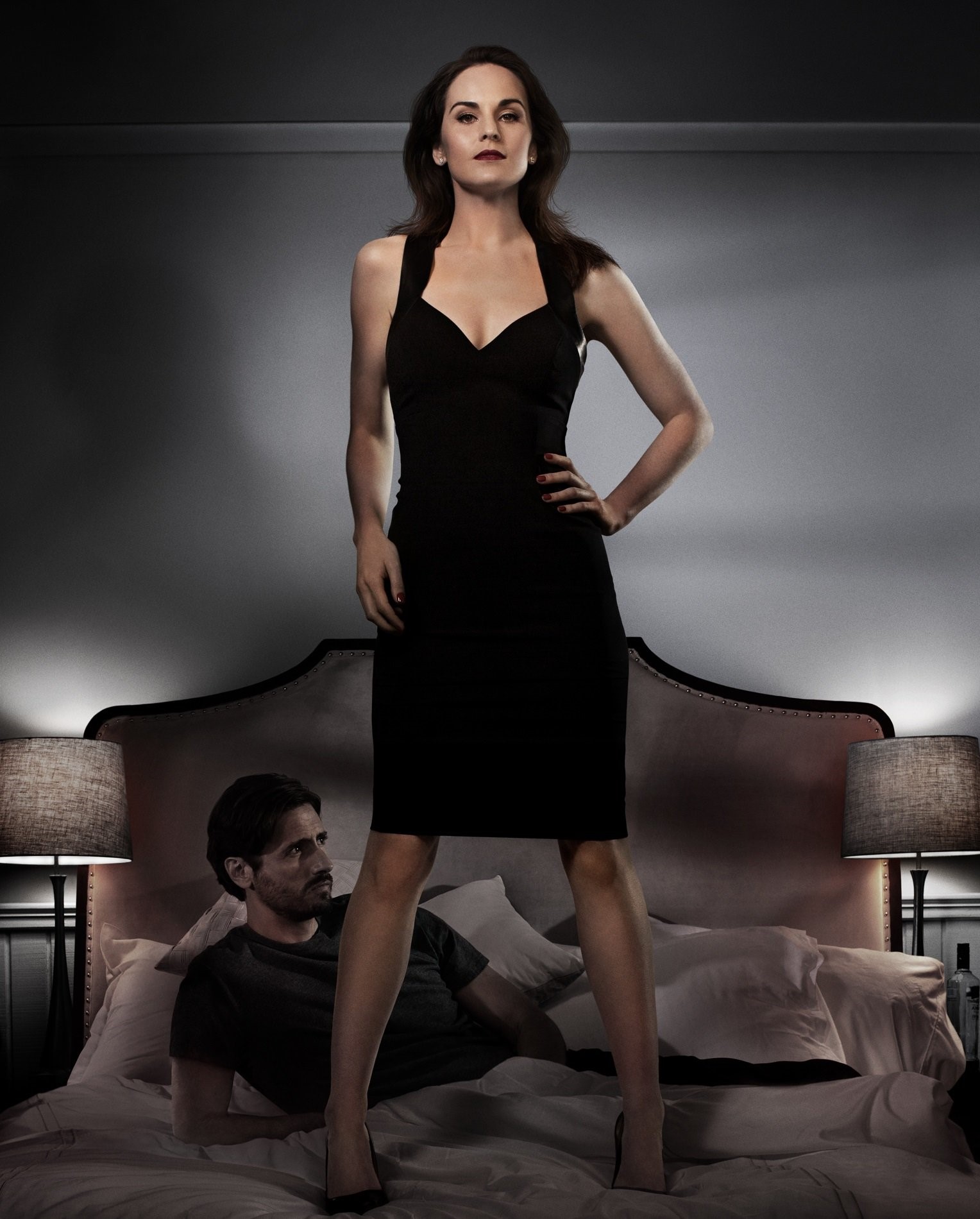 Beginning in November 2016, Dockery starred in the lead role of Letty Raines in Good Behavior, an American drama series based on the novella series by Blake Crouch. Letty is a drug-addicted thief and con-artist who, released early from prison on good behaviour, is attempting to get her life under control. This is complicated by a chance meeting and subsequent entanglement with a charismatic hitman, played by Juan Diego Botto. The 10-episode first season, airing on U.S. basic-cable network TNT, was filmed in and around Wilmington, North Carolina. In January 2017, the show was picked up for a second season. In November 2018, the series was cancelled after two seasons. In 2017, Dockery starred alongside Jim Broadbent, Charlotte Rampling, Harriet Walter, and Emily Mortimer in the British film The Sense of an Ending from CBS Films, based on the Booker-winning novel of the same name by Julian Barnes. She plays Susie Webster, the daughter of Tony Webster (Jim Broadbent), a man who lives in quiet unquestioning solitude until he confronts secrets of his past. “The film is a beautiful adaptation of the book which I love. And I jumped at the chance to work with director Ritesh Batra, who also filmed The Lunchbox (2013)”, explains Dockery. Later that year, Dockery played a lead role in the Netflix western miniseries Godless. She will be starring alongside Chris Pratt and Bryce Dallas Howard in Dark Horse. Dockery is a trained singer. She sang at the 50th Anniversary of Ronnie Scott’s Jazz Club in London and has occasionally sung with Sadie and the Hotheads, a band formed by Elizabeth McGovern, who played her mother in Downton Abbey. 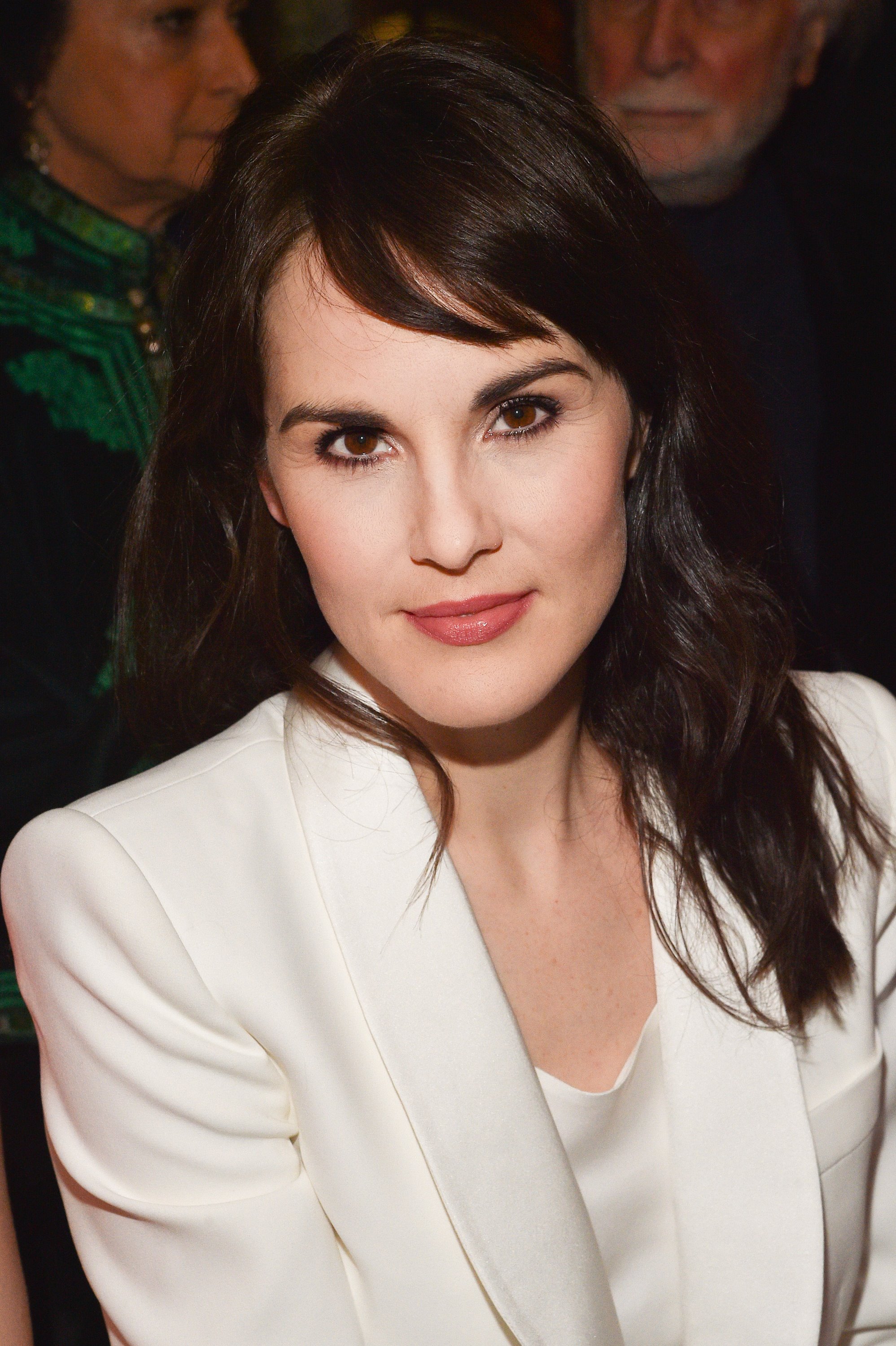 Dockery cites her musical influences as Peggy Lee, Melody Gardot and Billie Holiday in her more melancholy moods. In 2014, she revealed her music influences varied from the likes of Oasis to Joni Mitchell and Frank Sinatra, noting that, “My family bought me some old vinyl records for my 30th birthday, so I’m gradually building my own collection. “I’ve got some Joni Mitchell, Oasis and the Doors, old standards like Frank Sinatra and Nina Simone, and then what I listened to as a teen”, she confirmed to the Mirror UK. On World Humanitarian Day 2014, Oxfam announced Dockery as its first ever Humanitarian Ambassador. Dockery is also a patron of Changing Faces and supports a host of other charities. In 2014, Dockery was one of nine British celebrities featured in a short film promoting Stand Up to Cancer UK. Dockery started a relationship with John Dineen, from Waterfall, Ireland, in 2013. The actress had been introduced to Dineen, then a public relations director at FTI Consulting in London, by Irish actor Allen Leech, who starred alongside Dockery in Downton Abbey. Leech was quoted as saying “John’s like family to me and I knew he’d really get on with Michelle. She’s a great girl – probably as far from Lady Mary as you could imagine”. The couple were first pictured together when they were on holiday in Venice, Italy, during the 2013 Venice International Film Festival. The couple made headlines in 2015, when it was reported that they were engaged, with Dockery showing off a diamond ring to her co-stars during screen tests. But they guarded their privacy closely, with Dockery only briefly referencing, in an interview in 2013, that she had a “wonderful man in my life from Ireland”. In an interview in November 2015, she mentioned “I’ve got people around me who I can turn to for advice: my mum, and my partner, John.” Dineen died from a rare form of cancer on 13 December 2015, at age 34, in Marymount Hospice in Cork, with Dockery at his bedside. In 2016, Dockery stated that her fiancé’s death was not something she wanted to talk about, but she allowed that acting served as a release.